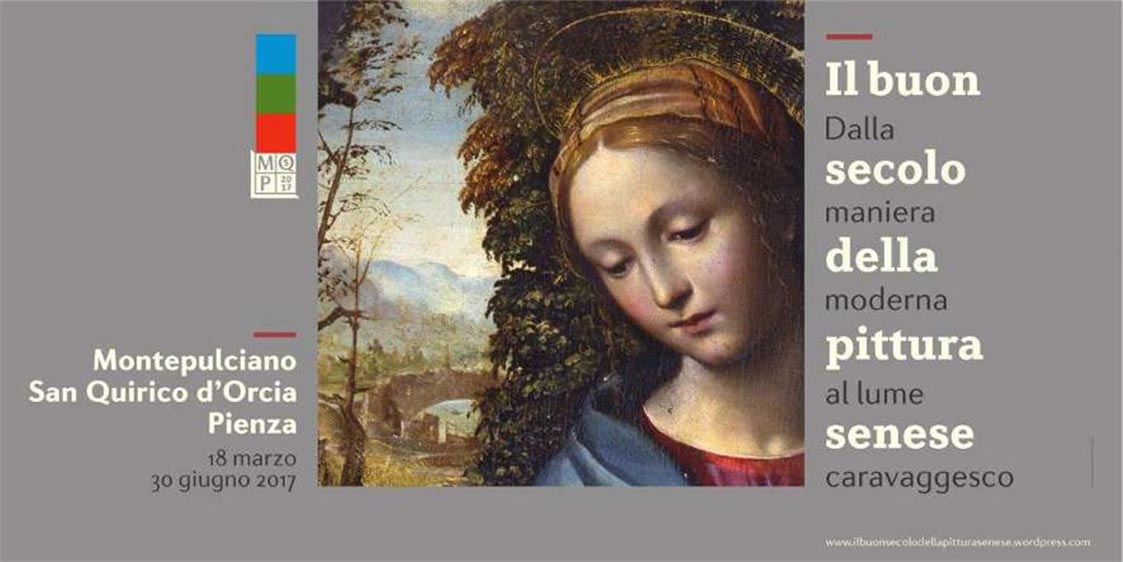 The title of this important exhibition, held in three remarkably beautiful towns in the province of Siena, is inspired by the words of the abbot Luigi Lanzi, an art historian who lived between the 18th and 19th centuries, and is dedicated to a specific historical period which goes from the beginning of the 16th to the middle of the 17th century, when art in and around Siena was filled with excellent and singular artistic personalities who, in most cases, are little known or completely unknown to the general public.

The idea of this original exhibition came about in order to rectify such a severe shortcoming. The towns of Montepulciano, San Quirico d’Orcia and Pienza are each going to host a section of the exhibition dedicated to an important artist from the area and to his environment, inspired by a masterpiece already present in the towns. Each sector also envisages an itinerary to discover other works as significant as those on display but which, for various reasons, have remained in their original locations (look at this). This solution enables the ideal completion of the visit with the added value of travelling around and discovering a splendid and magnificently preserved land. All the works on show come from prestigious public and private collections, churches and other religious institutions, the aim being to offer visitors as thorough a vision as possible of a great century which has been unjustly forgotten.

Starting with the delightful rediscovery of a documented work painted by the young Domenico Beccafumi, S. Agnese Segni, kept in the Civic Museum, the section illustrates the documents and accounts that led to the discovery of this important work and, subsequently, analyses the considerable problems relating to the artistic personality of the young Beccafumi, hosting a large number of his works together with masterpieces by Girolamo Genga, Fra’ Bartolomeo, Andrea del Brescianino and Lorenzo di Mariano known as Marrina, protagonists of the artistic environment in the province of Siena in the first decade of the 16th century.

From Sodoma to Riccio: Siena’s art in the last decades of the Republic

The painting around which the itinerary develops is the Madonna col Bambino e i Santi Leonardo e Sebastiano [Madonna with Child and Saints Leonard and Sebastian] by Bartolomeo Neroni, known as Riccio, who was a member of the Company of the Holy Sacrament of San Quirico d’Orcia. The section examines the artistic period from the late activity of Sodoma, of which various important works are present, also comprising paintings by significant personalities, such as Giorgio di Giovanni, Marco Pino and Giomo del Sodoma, ending with an extensive part dedicated to the considerable production by Bartolomeo Neroni known as Riccio.

The presence, in the church of San Carlo Borromeo in Pienza, of a splendid altarpiece by Francesco Rustici portraying the Madonna col Bambino e i Santi Carlo Borromeo, Francesco, Chiara, Caterina e Giovanni Battista [Madonna with Child and Saints Charles Borromeo, Francis, Clare, Catherine and John the Baptist], allows the reconstruction around this work of an interesting exhibition mainly regarding the activity of Rustichino, featuring several of his masterpieces, grouped together for the first time. The section also aims to illustrate the family environment in which the painter first began to learn his art, with paintings by Alessandro Casolani and Vincenzo Rustici, also proposing works by those artists who played an important role in his stylistic evolution, such as Orazio Gentileschi and Antiveduto Gramatica, for example, and closes with a group of paintings by Sienese artists who were his contemporaries, like Rutilio and Domenico Manetti, Bernardino Mei, Astolfo Petrazzi and Niccolò Tornioli who, all to a different extent, were influenced by the naturalist painting style.

Info point
+39 0578 717300
e-mail: This email address is being protected from spambots. You need JavaScript enabled to view it.
www.ilbuonsecolodellapitturasenese.wordpress.com